Crayfish in the Corve (aka Happy Snappy!)

The Happy Snappy - Crayfish in the Corve project has now drawn to a close. We are delighted to announce that native white-clawed crayfish (Austropotamobius pallipes) found in the River Corve as part of this project!

This project was kindly sponsored by Tesco Bags of Help initiative (https://www.groundwork.org.uk/sites/tescocommunityscheme), and was voted for by the wonderful people around Ludlow - thank you! We'd also like to extend our thanks to the volunteers who helped with this project in all weathers, the landowners in the Corve who gave kind permission for us to survey in their wonderful waterways, and Pam at Pam's Pools for letting us run a training session at her site.  Finally, a big thank-you to Caroline Savage (Environment Agency) her support, training, running sessions and licencing knowledge throughout the project.

The White-clawed crayfish (Austropotamobius pallipes) is the only native species of freshwater crayfish in the British Isles. It is under threat and rapidly decreasing in range. They look like mini lobsters and tend to thrive in clean, well-oxygenated rivers (see: https://www.shropshirewildlifetrust.org.uk/wildlife-explorer/invertebrates/crustacea-centipedes-and-millipedes/white-clawed-crayfish).

In Shropshire, populations have declined dramatically, though the River Corve in South Shropshire did once have strong numbers of White-clawed crayfish. River pollution and reductions of habitat quality are threats in many areas. Without action for conservation, White-clawed crayfish will continue to be lost from entire river systems.

To help conserve the species in Shropshire, the Happy Snappy project included:

- Surveying the River Corve for White clawed crayfish and invasive Signal Crayfish with volunteers;
- Training a volunteer survey team to undertake crayfish (and other native species) surveys and help with ongoing river monitoring along the River Corve;
- Identifying potential 'Ark sites' for the White clawed crayfish - Ark sites are isolated, self-contained sites which can support the establishment of healthy, self-sustaining populations, safe from non-native crayfish and crayfish plague.

After many hours searching the tributaries to the river Corve, we found some fantastic species, including many bullhead fish (Cottus gobio) and caddisfly larvae. Now that we have discovered native white-clawed crayfish (Austropotamobius pallipes - see photos below) in the River Corve itself (along with dippers, dipper nests and signs of otters), with no signs of the Signal crayfish being present, we are trying to determine the extent of the population upstream using various methods including eDNA testing. The presence of these species signify that the river and tributaries in those areas are in fairly good condition, with wildlife-friendly farming and low pollution levels, so thanks to locals and land-managers for your efforts!

This summer, we have also helped Staffordshire Wildlife Trust relocate over 500 native crayfish from a location that is likely to be contaminated with crayfish plague in the near future, to a safe, new home, way up in the hills, away from any other crayfish. Following thorough disinfection of kit and wellies, we carefully turned rocks and searched through woody debris in the stream, capturing as many crayfish as we could find (and getting pinched several times in the process!). All the crayfish were checked for disease and measured to determine their age, before transportation in aerated tanks for release in small groups of mixed ages along the brook.

We would love to hear from you if you have seen crayfish of any kind in Corvedale rivers and streams. Wherever you are, if you are entering water, remember to use the 'Check, Clean, Dry' system to prevent the spread of diseases and invasive species: http://www.nonnativespecies.org/checkcleandry/  .

Native crayfish are an endangered, protected species, so you need a licence to trap/survey/handle them: https://www.gov.uk/guidance/permission-to-trap-crayfish-eels-elvers-salmon-and-sea-trout .

This project was kindly sponsored by Tesco Bags of Help (https://www.groundwork.org.uk/sites/tescocommunityscheme), and was voted for by the wonderful people around Ludlow - thank you! 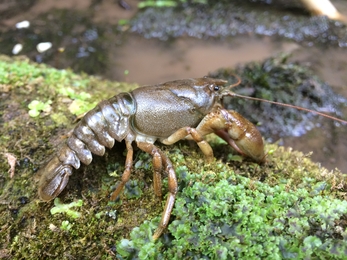 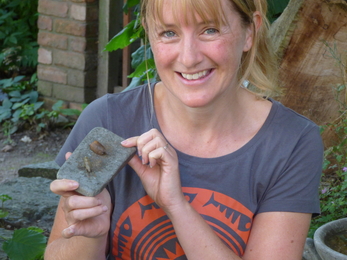 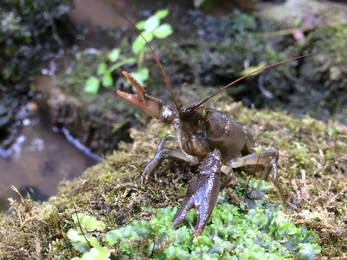 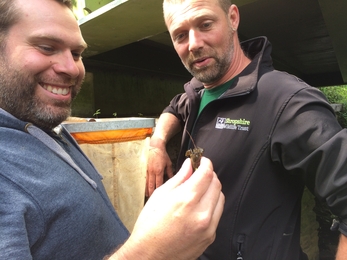 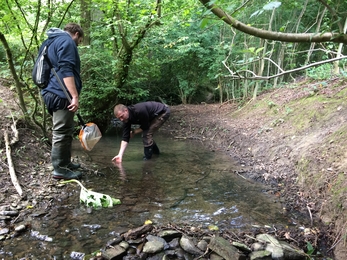 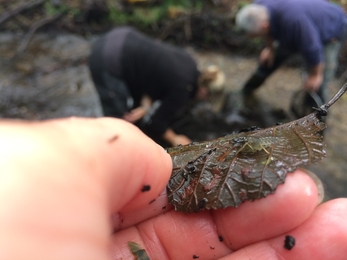 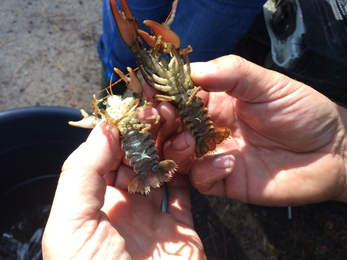