There are three types of fish, saltwater, freshwater and those that can tolerate both states, such as Atlantic salmon, eels and Brown trout.

About 15,000 years ago the ice sheet that had bound northern Europe began to retreat and as the freshwater rivers and lakes began to move again, fish made a bold return.

Since then man has played his part in introducing exotic and sadly harmful continental species into the British Isles. Introductions have been made for food, angling or conservation reasons.

Of the 174 fish species now living in Britain and Europe, 22 are introduced and 152 are native, of these 42 are endangered.

Being a fish is a risky adventure!

Fish have evolved in a unique way to absorb oxygen, inhaling water over gills, taking up the dissolved oxygen before discharging the water back out. Excesses of pollution reduces oxygen leading to catastrophic fish kills.

Sediment pollution from soil or road run-off can clog spawning gravels, coat food sources, make hunting difficult. Large industrial pollution incidents kill millions of fish and the effects can be passed rapidly up the food chain to affect birds of prey and otters.

River systems have been modified for power generation, navigation and water supply. Weirs have become impassable obstacles to migratory fish. Much work is now being done to install fish passes to allow passage for weak swimmers such as the Twaite shad.

Our upland stream is a fast, oxygen rich pattern of pools and riffles with few plants and low in nutrients.

Brown trout, small, pretty and ace swimmers rest up in the pools, shelter under woody root systems and during October search out clean, loose gravels for their egg laying.

Up here young salmon may lurk and grayling flash by with their sail like dorsal fin. Fish here point upstream fetching out scraps as they are brought down by the flow or picking off nymph or beetle larvae unwise enough to make a move in the clear waters.

As turbulence decreases the river widens, the pools on the outside of meanders deepen, with an increasing amount of silt deposited which when above the normal surface becomes vegetated.

Chub lurk under the shade of riverside trees, shoals of minnows rush recklessly across the shallows of the softer edges of the river. Dace stay further out in their silvery schools.

Bullheads can still be found lurking under their home cobble. Less frequently Stone loach can be seen, though the nutrient levels are now rising and water is more prone to turbid murkiness. 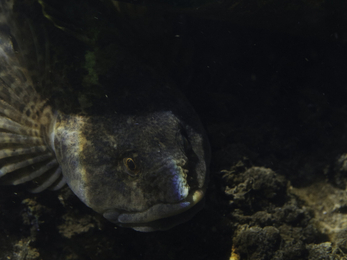 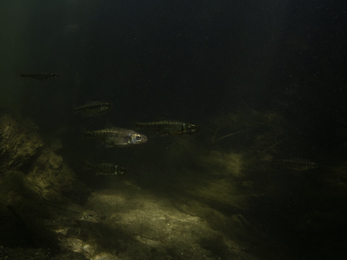 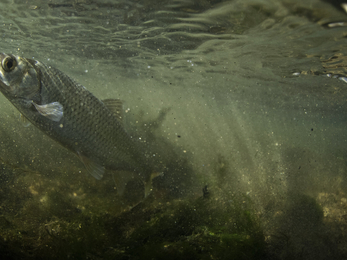 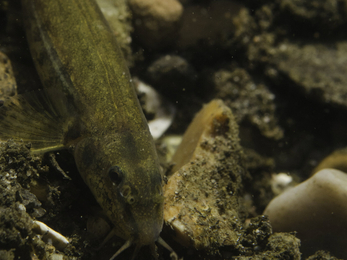 Broad, slow reaches of water, fringed with river side willows, deeper pockets of water barely given away by mild swirls on the surface are all characteristic of the lower river.

Barbel, the river anglers favourite, seek out slow sections of water down by the river bed. Bream hang around in the fringing water plants, skittering away as they encounter a Pike in ambush.

Atlantic salmon and Brown trout may pass through heading to the spawning grounds or back out to sea. The trout and salmon are anadromous, meaning they move from sea to freshwater river, the Sea Trout is merely the blue-silver river trout just returned from the sea.

Lakes can be rich in nutrients which feed a luxuriant plant growth on the margins or beneath the surface.

Predatory fish such as Perch or Pike are spoilt for choice for hiding places, these aggressive fish give their presence away by a rapid dash leaving an arrow wake above.

Roach, Rudd and Tench feed on the pool or canal bed, thriving on the rich picking from the copious number of aquatic  invertebrates  to be found in these habitats. Hog lice, water boatmen, sedge flies and cranefly larvae can be consumed in high quantities.

Carp have been introduced into many pools, they are popular with anglers and can reach very large sizes being quite long lived. Other introduced fish species include the Zander and Bitterling, one an aggressive predator,  the other much smaller with a unique breeding system that involves a flexible ovipositor to lay eggs inside freshwater mussels. 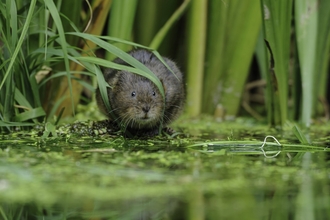 Few species are truly comfortable with the water, here is an introduction to 6 of them. 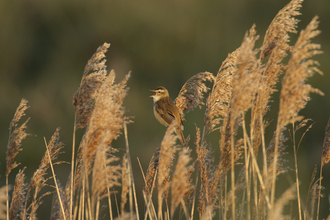 There are a variety of aquatic plant communities found in habitats associated with water. Read about them here. 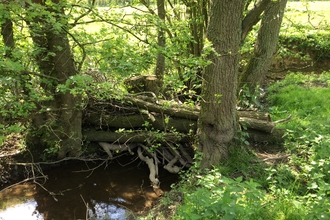