Orchids have long held a mystique. Shropshire’s nature reserves and wild places are full of orchids, you just need to look in the right place at the right time.

A warm summer day, and what better to do than go hunting for something truly exotic in the Shropshire countryside.

Orchids hold many associations, most with sexual overtones – a rich gift for a loved one, something to drive a collector mad with passion, a mediaeval aphrodisiac of such strength that the English herbalist Culpeper called for caution in its use.

Orchids cannot compete with rank vegetation so you need to look where nutrient levels are low. Limestone soils are thin and often productive for the orchid hunter.

Shropshire holds at least twenty species of orchid, but many of them take a bit of hunting for. If you know when and where to look, though, an orchid hunt can be richly rewarding. As we go into July, the earliest species will be past their prime flowering period, but there are lots of later ones to seek out.

These truly live up to their name, particularly at Sweeney Fen nature reserve.  Just a couple of acres in size, it has thousands of flower spikes that scent the air on a warm July day.  Mixed in with them are Marsh Helleborines for good measure.

Not far from Sweeney Fen is Llanymynech rocks – the huge cliff face visible from the Welshpool to Oswestry road.  Amongst the quarry spoil grow white flowered butterfly-orchids in June and July.

In September you can find autumn ladies tresses.  The short spikes have white flowers that spiral around.  They’re difficult to spot, but well worth the effort.

Nearby, at LLynclys Common look for twayblade, greater and lesser butterfly-orchids, and fragrant orchid. 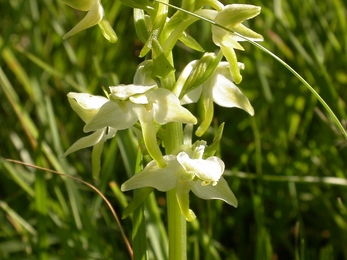 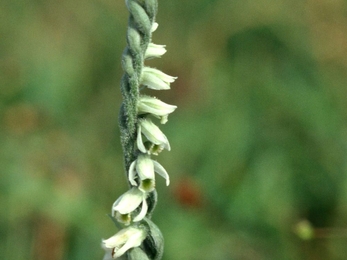 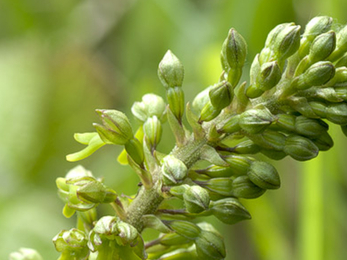 This mimic uses its sexy scent and appearance to trick bumble bees into trying to mate with it.  As the hapless bee attempts to copulate the flower attaches pollen that the bee will transfer onto the next flower it visits.

The pheromones released by the flower precisely match those of the bee species it wants to attract.  Evolution at its most ingenious. Even the great Charles Darwin, who studied and wrote about the orchid species around his home in Kent, found it hard to believe that insects could be duped by ‘so gigantic an imposture’!

The sandy banks of Wood Lane support hundreds of bee orchids in July.

Vivid blooms of fuchsia or even magenta shout out from the grasses and herbs of Farfields hay meadows.

These tall (up to 50cm) robust flowers generally have leaves without spots, but beware they form hybrids with common spotted orchids so some do have spots just to confuse you!

The orchid family is the largest and most diverse in the plant kingdom with 28,000 known species – one in every ten plant species is an orchid – and one of the earliest, arising between 76 to 84 million years ago.

Orchid seeds are minute, dust-like and wind-dispersed. For them to be light enough to travel far, they contain no food reserve for the emerging seedling to use before it develops roots. Instead, they rely on mycorrhizal fungi, which envelops each seed in a sort of fungal incubator which supplies it with food and water until the roots, stem and leaves are formed. Without this fungal intervention, orchid seeds could not germinate.

High summer in the wildlife garden

We all enjoy a spell of hot weather – out in the garden with a cool drink, barbeques with friends and long evenings as the day cools…

Mid summer is a great time to go out in search of odanata: the group of insects that is made up of dragonflies and damselflies. Often a…

How to get started in the wonderful world of moths!

Moths can be seen throughout the year, with the greatest variety in the summer. Everyone can enjoy searching for them, they come in…